Forage yield, water- and solar radiation-productivities of perennial pastures and annual crops sequences in the south-eastern Pampas of Argentina 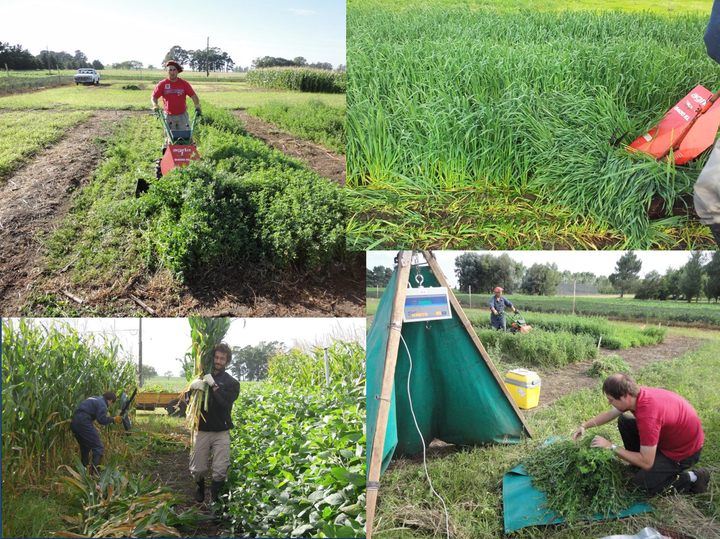 Livestock production systems of Argentina show an ongoing process of change in the composition of their forage base, with a gradual increase in the proportion of their area assigned to forage crop sequences (FCS) −in particular that involving successive winter and summer annual forage crops–, at the expense of the area assigned to perennial pastures (PP). However, there are several concerns regarding the efficient use of available environmental resources due to differences in the extent of the establishment periods and due to the occurrence of fallow periods in FCS, as well as regarding the species involved in these systems. Therefore, the main objective of this study was to evaluate the water (WP) and solar radiation productivity (RP) of PP [pure stands of alfalfa (Medicago sativa L.), fertilized and unfertilized stands of tall fescue (Festuca arundinacea Schreb.), and fertilized and unfertilized mixed stands of alfalfa/tall fescue] and FCS [including a summer alternative and oats (Avena sativa L.); the summer alternative was either maize (Zea mays L.) or intercropped maize/soybean (Glycine max L.)] through the analysis of their components, i.e. water (WC) and radiation capture (RC), and their water (WUE) and radiation use efficiency (RUE). Resource capture (WC and RC) was defined as the ratio between captured (evapotranspiration and intercepted solar radiation) and annual available resource (rainfall and incident solar radiation). Resource use efficiency (WUE and RUE) was computed as the dry matter (DM) yield per unit of captured resource. A field experiment was conducted during two consecutive years under rainfed conditions and under non-limiting nitrogen availability in the south-eastern Pampas of Argentina. Perennial pastures were evaluated during both their initial establishment year (Y1) and when already fully established (Y2). Annual-based forage DM yield ranged between 13.0 and 32.4 Mg ha−1 in Y1 and between 5.1 and 23.5 Mg ha−1 in Y2. Differences in resource capture between PP and FCS were directly associated with the crop establishment and fallow periods depending on the nature of the considered resource. The highest WP (2.75–3.64 g DM m−2 mm−1) and RP (0.93–1.42 g DM MJ−1) were reached by FCS, which did not differ (P > 0.05) from that of fully established fertilized PP. Our results demonstrate that resource productivity in FCS is not necessarily higher than for PP, once PP are fully established.