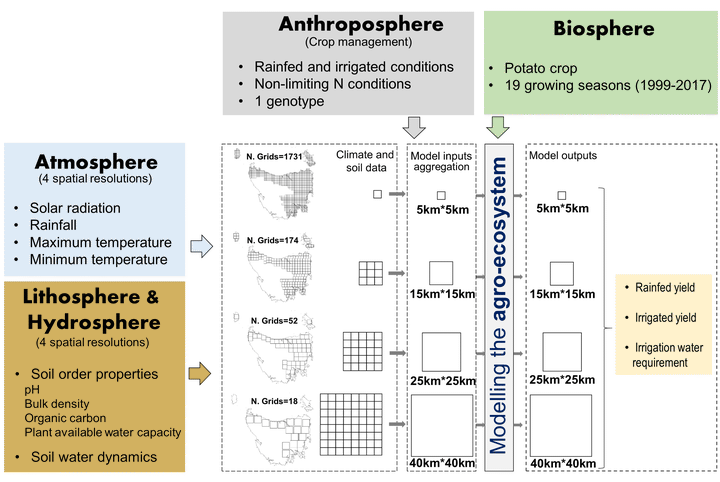 Input data aggregation affects crop model estimates at the regional level. Previous studies have focused on the impact of aggregating climate data used to compute crop yields. However, little is known about the combined data aggregation effect of climate (DAEc) and soil (DAEs) on irrigation water requirement (IWR) in cool-temperate and spatially heterogeneous environments. The aims of this study were to quantify DAEc and DAEs of model input data and their combined impacts for simulated irrigated and rainfed yield and IWR. The Agricultural Production Systems sIMulator Next Generation model was applied for the period 1998–2017 across areas suitable for potato (Solanum tuberosum L.) in Tasmania, Australia, using data at 5, 15, 25 and 40 km resolution. Spatial variances of inputs and outputs were evaluated by the relative absolute difference (rAD) between the aggregated grids and the 5 km grids. Climate data aggregation resulted in a rAD of 0.7–12.1%, with high values especially for areas with pronounced differences in elevation. The rAD of soil data was higher (5.6–26.3%) than rAD of climate data and was mainly affected by aggregation of organic carbon and maximum plant available water capacity (i.e. the difference between field capacity and wilting point in the effective root zone). For yield estimates, the difference among resolutions (5 km vs. 40 km) was more pronounced for rainfed (rAD = 14.5%) than irrigated conditions (rAD = 3.0%). The rAD of IWR was 15.7% when using input data at 40 km resolution. Therefore, reliable simulations of rainfed yield require a higher spatial resolution than simulation of irrigated yields. This needs to be considered when conducting regional modelling studies across Tasmania. This study also highlights the need to separately quantify the impact of input data aggregation on model outputs to inform about data aggregation errors and identify those variables that explain these errors.